“Corona-Amaral Arquitectos” is a practice dedicated to the quest for quality architectural production from the implantation and the moment of execution right through the constructive details, materials, finishings, fittings and equipment for projects of varying scales. Antonio Corona Bosch and Arsenio Pérez Amaral are the founding partners, and Mark Senning an associate architect.

Their most recent commissions include the adaptation of the emblematic 5 star Hotel Mencey comprising the new build of a spa and car park as well as the remodelling of the gardens and the interiors, the renovation and fitting out of the VIP pavilion (Salomé) for the 5 star Anthelia Hotel, the restoration of the historical bridge “Puente del Cabo” and a “Villa in Playa la Arena” looking over the sea. Corona-Amaral Arquitectura has its origins in 1984, the year in which the architects Antonio Corona Bosch, Arsenio Pérez Amaral and Eustaquio Martínez García began their professional activity with their first denomination of N. Tres Arquitectos S. L. Throughout the years it has undergone various changes in its name and corporate composition.

At the present time Corona-Amaral Arquitectura is owned by Founding Architects such as Antonio Corona Bosch and Arsenio Pérez Amaral, and the Associated Architect Mark Senning.

Corona-Amaral Arquitectura is distinguished by the quest for architectural quality based on prioritizing the use of resources and constructive solutions, being economically controlled to give a balanced response to the environment, the place and to the user’s requirements.

The approach to the projects is made, especially in the initial stages, with an intense participation of the client acting in a coordinated way with all the involved agents in the production development processes: Definition of the concept, implementation planning, economic and constructive strategies development, comparative study of alternatives, including interior design development and furniture industrial design.

The construction development and execution processes are carried out by integrating into the services of Corona-Amaral Arquitectura the management and coordination with specialists in structures and engineering, industrial and suppliers, selection of construction companies, monitoring and quality control of the work and after-sales service.

The developed work fields, not only focus on building construction, but also on strategic planning, urban regeneration and landscaping.

For that purpose, Corona-Amaral Arquitectura has introduced, since the year 2008, the Quality Management Certification ISO 9001, the Environmental Management System Certification ISO since 2009 and EFITECNIC, all certified by the Construction Institute of Castilla León (ICCL), under constant review, ensuring these objectives through procedures and control systems supported by the experience of monitoring incidents and non-conformities of all work.

In this last year in Corona-Amaral Arquitectura, the quality system has been completely adapted to the implementation of the BIM working environment, especially in terms of cost control, the firm’s databases, collaborative work with specialist engineering companies, structures and construction engineering, etc. These adaptations have been audited with positive results by the ICCL.

During its professional career, Corona-Amaral Arquitectura has obtained different prizes and distinctions, such as the first prize in the 5th edition of the Manuel de Oraá Architecture Prize of the Colegio Oficial de Arquitectos de Canarias (Official Architects Association of the Canary Islands) and the selection for the II Biennial of Spanish Architecture of the Jet Foil Maritime Station building, honourable mentions for various works in the 3rd, 5th, 6th, 7th, 8th and 10th editions of the aforementioned Prize for Architecture, as well as the selection of the work of Tenerife Norte Airport for the exhibition “ON-SITE New Architecture in Spain” at the MOMA of New York in 2006 exhibited in Madrid the same year.

The “Urban” Plan of Santa Cruz de Tenerife, an urban regeneration operation in Santa Cruz carried out between 1999-2001, won the The European Community Prize. A retrospective exhibition of Corona-Amaral Arquitectos’ works, organized by the Canarian Government called “Inserciones, Inmersiones” (“Insertions, Immersions”), was exhibited in the Canary Islands and Morocco in 2007. From 2009 onwards, the study’s experience in public space management and urban design under the umbrella of the ADECOT Cooperation Project, strategic projects have been developed in several Moroccan cities such as Taroudant, Tiznit, Sidi Ifni, as well as the Talborjt neighbourhood of Agadir, where an urban regeneration intervention was carried out with a large team of professionals from different disciplines.

Designs such as the “Paseo Marítimo del Médano” (Tenerife), the rehabilitation of the “Casa Franco de Castilla” in La Laguna (Tenerife) (XXVIII century) to turn it into a notary’s office or the “Casa Jardín del Sol” in Tacoronte (Tenerife), published in numerous specialized magazines around the world, are part of the experience of Corona-Amaral Arquitectos.

Their most recent commissions include the adaptation of the emblematic 5 star Hotel Mencey comprising the new build of a spa and car park as well as the remodelling of the gardens and the interiors, the renovation and fitting out of the VIP pavilion (Salomé) for the 5 star Anthelia Hotel, the restoration of the historical bridge “Puente del Cabo” and a “Villa in Playa la Arena” looking over the sea.

Corona-Amaral Architecture has collaborated, as local architects, with other prestigious architectural firms such as Herzog & de Meuron and Foster and Partners.

Lectures, exhibitions and other activities 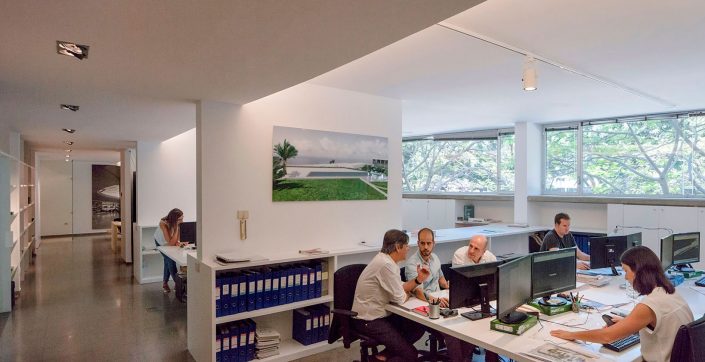